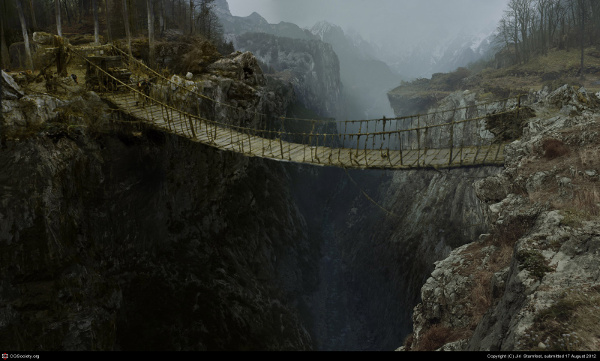 I wrote this as an adventure setup, in the style of a (long) event promo blurb:

The gorge looked a lot nicer when you weren’t running for your life. The sagging rope bridge bounces more than you’d like and you’re not making good time, what with all the loot you’re carrying.

The bridge probably wasn’t that safe to begin with. The mob of enraged villagers on one end is balanced nicely by Angry Bill and his crew on the other. It’s only a hundred feet to the bottom of the gorge, and the places that don’t have rocks are full of crocodiles.

Your options seem to be limited. The villagers want you dead, since you stole their idol, ate their best food and had that fling with the chieftain's daughter and all. Angry Bill looks a little vengeful and so does his crew, although they look shaky from the scurvy they got after you set them adrift last month. But maybe those crocodiles are just logs, and surely those rocks aren’t as pointy as they look from here.

Will they cut the bridge? The villagers probably want their idol back. And they like having a bridge. Angry Bill, however, already has a rusty blade sawing into the rope on his end. If you hang on and survive the collision with the cliff wall, the massive spiderwebs around that cave might bring their own problem.

And so it begins. Welcome to Pauron's Edge and the East Isles!