Welcome to Telrhin. A world setting for dice & paper rolepaying games. Home to my campaigns since 1984.

From the Blog: Excerpt from the Field Guide: The Court of Kalidahr Irongrip

This is from some new work in the Field Guide to the Lowlands, in a section on Courts and Intrigue.

Very possible this was all influenced by too many games of this:

Lockdown gaming has driven us to this... pic.twitter.com/T7US1yTL5E

Kalidahr is the ageless Boradun ruler of the city, a despot who rose to power in the aftermath of the Great War and rebuilt the city as an independent citystate in the process. His court is a vast palace on the lone high...

Panache, that's what a world needs

Adventure, sorcery, culture, mystery, a vibrant world with a rich history and a lot of color. And a good codpiece.

Which brings me to the point: a world setting is a framework, it needs to be cohesive and make sense, but most of all it needs to suit the story and the players. It needs to be amenable to the twists, turns, creativity and occasional bouts of the ridiculous.

Because it's just a fantasy game world. Religions are founded on less and you can't take it too seriously. Underneath it's still magic swords and orcs. And did I mention a good codpiece?

When it all comes together a game world should be more than the sum of its pieces: it should be vibrant, intriguing and have a sense of mystery. It should reward you for looking into the dark corners. And it needs to flex and stretch to fit the story you want to tell. So jump in, kick the wheels on the cart, ask what's on tap. Explore and make it yours. In the end, it's just a set for your adventures.

There was chaos in the melding of the Lost Dreams, giving way to the Great Dream: a gathered single world of mythic and impossible things. It cracked and boiled out into new parts: the Embers of lost secrets, the Umbra of ideas too large, and what remained was the Known World, the monde vrai.

Over the centuries this remnant world was slowly tamed under the boots of the Morden, the Kaladri, the Boradun, and the Grend: empires of fire, knowledge and steel. Looking back only to see legends and fairie tales.

And now the midſommer: the look beyond, the fears of change, the lost hopes of the past. But most of all, the foundations of it all cracking under the lies of a painted history. Will the world boil over again, thrown into more pieces, or will it solidify into the truths of the future, empires falling and dark ages replaced by new eras of golden summer?

"It glistened as it opened, drops of glass and silver dripping down the twisting petals, a growing torrent showering the darkness with its first light. The world was born. The Great Dream began. And with it all the hope, all the tears, and all the long years to come in a struggle that would outlast the Dream, the Myth, and the Ages."

from "Chorus of the Embrings" a romanticized description of the birth of the Great Dream following the Diegesic Struggle, which was actually preceded by the Twelve Dreams. But people like to think of the Great Dream as the beginning.

A Pile of Broken Truths 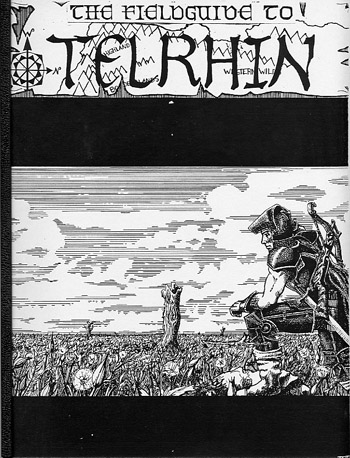 Telrhin is an FRPG setting with origins as far back as 1981. I've used it for almost every fantasy game I've run, from full blown campaigns on both coasts to one-shots in coffee shops. And a few games in France too. In the late Eighties a snippet from one of our games was aired on Swedish radio about the 'D&D phenomenon'.  Jody Stephens from Big Star [wiki], Tommy Hoehn [wiki], and Lesa Aldridge from The Klitz even played in some games. And to the bride's undoubted chagrin, Telrhin has even been mentioned in a wedding toast.

What started as the clumsy imaginings of Tolkein-obsessed teenagers evolved into what it is now: an elaborately imagined world of high fantasy thirty years deep.

What's Telrhin mark iv like? Armor rarely shines, faieries are a right pest and elves can be real dicks. Gods are a misconstrued fallacy of myths that are sometimes fact. But above all, the future will be determined by the slowly settling truths of an exhausted dream.

The Tale of the Ember Queens

The Two Queens, first among the Ethrings and last vessels of the Ignis. The remain as strands of an ancient truth, a long thread of purpose in the tapestry of the world: shaped by the unfolding of years, the choices of men and the dreams of the Embrings as they slide into forgetfulness.

Their unfinished tale holds the secrets of the world.

Now, in the midsummer of the world, some of these scattered pieces gather in one place every year. This is the Court of the Tethered Duchess, a mystical event in the forests of the Lowlands, a rare court of the faie, where the Known World and the Embers meet. The few who see it may not know it, but in this moment the gathered threads of the story come together -- if briefly -- in this one glimpse of the grand tale. The Tale of the Two Queens.

This is a story of ambition, betrayal, jilted love and a tenuous hope. And it's the central core of the re-imagined world. The great satisfaction of a long campaign is the unraveling of the world's mysteries, all of which hinge on this story in one way or another. A story about the dark secret of the Kaladri, vestiges of a lost dream, a struggle to shape reality itself, and the consequence of broken hearts.

Telrhin has had several incarnations. It began as a puerile Tolkein rip-off (mark i). It got a re-write and became a grognard Tolkein/Howard rip-off (mark ii). It got a facelift and evolved into a more sophisticated fantasy world with less grognard and more story (mark iii). Re-imagined from the ground up ("from the nave to the chaps"), mark iv is a high fantasy world of crumbling empires, lost truths, secret alliances and a far reaching struggle to shape the future. A good place for 'a spot of adventuring'.

[ check out this post on re-working the origin story ]

Telrhin has been home to a handful of long and engaged campaigns, notably Campaign Theta and the SF Campaign. More recently all the work, artistry and long years of craftsmanship served as fodder for the Brothers Rahman in our anti-hero campaign best described as a satirical assault on heroic adventure gaming.

Buried in this site is a summary of the campaigns, a few archived issues of the Adventure Log (with some of the unpublished work from Issue 41), a Field Guide to the Lowlands, and of course the Encyclopaedia Telrhinica.

The Encyclopaedia is a database drawing from game notes, world elements and player notes. It started as WordPerfect files: a Bilbo-like digital clutterwork hiding the secrets of a world. There are just under 1000 entries.

The Nine Hells of Home Brew

Telrhin has suffered through a variety of rules, mostly home-brew AD&D variants. The Rules Museum is a happy walk down memory lane. We're currently using the 7th Edition of our in-house rules (affectionately called Stabmaster) as we transition to our new Fat Dragon rules: "Fat Alpha" (or more commonly just 'broken Alpha').

An excerpt from the Rules Museum:

A good roleplaying game is about the characters and their story. Rules help shape the reality and force a certain flavor, but if anything a good game is good despite the rules.

Beyond the comfort of familiarity, rules are just rules, and if you're married to them you're probably not an actual roleplayer. Admittedly, if you have an amateurish narrator/gamemaster who isn't collaborating and wants to control everything, the rules can be a form of 'player bill of rights', enshrining the capabilities and options the player has in a game. But better yet, just quit and find someone better to run your game.

Given, some players play for the rules, approaching a roleplaying game as a tactical strategy game with rules as a tool to manipulate to their advantage. Though I've enjoyed many good discussions and arguments about rules while a game is in progress, these people usually suck as roleplayers and should stick to games with tanks and minis.

All a player really needs to know is that every time they stab someone the same thing happens.

Where is it All?

The full site is retricted to players (old and new!). Drop me a note if you think that's you. Even the menu is truncated until then.

You can check the main blog for a few posts on the world though:

The Court of Kalidahr Irongrip (courts, politics and the 'day courts' of the faie)

The Pox Crain (where things are more than they seem)

The World: A Bedtime Story (an origin tale)

What's Fashion if not a Codpiece (panache in a gaming world)

And some esoteric stuff on the origin tale: Revisiting the Origin Story (musings on world design)

Today is Wahrs, the sixth day of the week in the Lowlands. In the Empire they call it Vath (Rayikian calendar).
Today's date in Telrhin is Autumn 21 (Sepper 19)

The World: A Bedtime Story

“tell us the story, Uodoom!”

“yeah, tell us the story Uodoom Tan!” they said as he tucked them into bed.

“the story of the world?” and they nodded, the old man stroking his long tangled beard, “alright. But how about the real story, the way it truly happened, with the Fool and the Fighter and the Chimerum of the Ignis before the Great Dream swallowed them all?” he said, his eyes lighting up, “the Antedivisian dream before the schism of the Ember and the Umbra and the rise of the pretender gods?”

The kids looked up at him blankly.

“we want the one with the mama snake, and the moons. And the night sun. The way papa and grootpapa tell it,”

The old man stared at them for a minute.
“fine.” he said, just like your dumb papa and dumb grootpapa tell it, he thought.

“here goes:
“Serpent Earth -- that’s mama snake -- coiled herself to sleep after the Long Night in which all things came to be. The days were endless and the land was lush. But the night sun -- that’s Orh, who was the black sun then and shared the sky -- grew bigger and bigger. He got so big he threatened to blot out the gold sun Hael -- that’s the grootsun -- and they fought, casting huge shadows onto the world. The three moons, Tael and Luin (mothers of all people) and Masiel (mother of the Kaladri) were worried that the two suns would wake Serpent Earth, and she’d be so angry she would destroy the world. So they made a peace between them where Orh would have the night and Hael -- the grootsun -- the day. And the three moons were lifted from Serpent Earth to watch over us and they became the grey and red moons, mama Tala and aunt Luna, with Masiel as the black moon Mashana to keep the peace between the suns.” he said, the kids sound asleep as he finished.

Oudoom Tan walked outside, looking up at the night sky over the Lowlands, the ring of stars around the dark void of the Well of Dreams, the two moons and the distant black planet Orh and its moon Mashana.
“they never want to hear the real story,” he said, making his way to the next farm.