What's Fashion if not a Codpiece 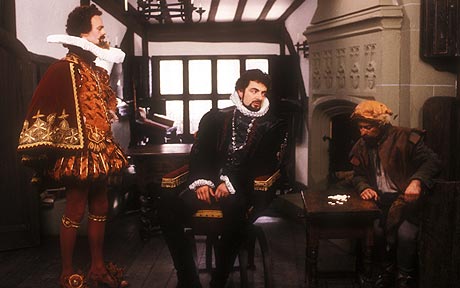 Image from Blackadder the Second

I just added a culture sidebar for the section on the Lark-Han citystate:

Safe in their wealth and protected from the outside by walls and a powerful navy, Lark-Han has been freed to pursue the arts, culture and science. A cosmopolitan world of trade exposed to the far ends of the Valek, Khitagan, the mountain kingdoms of the Boradun and the edge of the Damoran Empire, the mirfolk have reached an early renaissance.

And that means ridiculous clothes. Doublets, hats of all kinds, pointy boots and the more outrageous the codpiece the better. The burghermage Pendleton was seen with a codpiece so large it was festooned with three masts. Flat caps, bag hats and mopcaps, bicorns, tricorns, and calottes have taken over from the sockcaps and cowls of the country rubes.

Dyes from Shadis and Pauron have brought the streets alive with color, from the clothes to the drapes and awnings and even the painted shutters of the City of Pearl.

Widespread literacy in the city (thanks to the mir schools) means a thousand printed rags with news, gossip, dogma and erotica, posters on half the walls and books in all forms of the printed word.

Weaponry in a civilized city has moved to the rapier (although not street legal per se) and the poignard, fast weapons that work well on a mostly un-armored citizenry.

Telrhin is apparently a fashion site!

Since posting this I get spam offers to promote telrhin.com as a fashion storefront! This one's from "Kaylee, your ecommerce guide!"

Hi. Fashion sites take a lot of work especially if you run your own brand. It’s no longer enough to have a storefront, you also need to have a presence wherever there is a customer to buy. I'm an eCommerce advisor for various enterprises and I will help you set up a store that can sell anywhere from Amazon to eBay and more. Let me know who I should speak with to get started.