Normal Folks in a World of Monsters 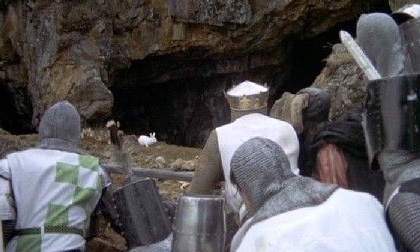 Monty Python and the Holy Grail

Wolves, bears, garden-looting rabbits: real problems for medieval villagers. They also had bandits, plagues and feudal wars. Add in some griffons, goblins, ghosts, dire wolves and a few heartless fairies and you wonder how normal people get through a single day in a fantasy world.

How do things work in a world with magic? We focus on the beasts and monsters in the wild, but villages and settlements have to have some way of surviving. Following are some thoughts on how it all can work, making better sense for a world while adding layers of story and even -- gasp! -- adventure hooks.

It may be that folks at the edges of the tamed world are more seasoned and a little tougher. It could be that the flip side to monsters is a long list of offsets: powers and creatures that protect the farms and crossroad taverns.

And of course, there are stranger challenges: Emily Carroll's His Face All Red is a nice creepy village story.

Farms as Outposts of Humanity

Fairies come in many shapes and dispositions. A helpful hob, barn fairie or house fairie. These are little creatures that do (mostly) helpful things. They keep the brass polished or latch the door when you forget. They keep the meat from turning. Most importantly they know when threats are coming, sometimes long before they happen. They may not be that tough in a fight, but they can confuse and distract, hide things or people, start fires and send animals running. Their mischievousness can come in handy: unbuckled saddle, mis-nocked arrow, loose bowels, or just a heads-up to run for the hills.

Farm villages often have their share of old magic: generations of people leave their mark, with old hearths and keystones that bless the home and bring good fortune, protect the people or just do their part to influence the minds of monsters and men thinking of making a meal of the place. Villages are gathering spots, sometimes chosen for pragmatism but often guided by older forces: sacred or magical places with their own protective nature.

...Even tiny hamlets have a "wise woman" (cunning folk and pellars)

In a fantasy world the church is a real and palpable influence, with divine protections, patron spirits and real powers to protect and defend. Whether the faith of the village is a formal religion, mythic shaman cult, druidry or coven, they have spells and some degree of magic. Even tiny hamlets have a "wise woman" (cunning folk and pellars). There may be spirits who (like the fairies) look out for the people, and ghosts who don't look kindly on outsiders.

Although the example here is from a major city, this post shows the 'mundane magics' you can expect in the Temple of Tala the Wise in Lark-Han.

On a more practical level a village has seasoned hunters and bowman, a few experienced men and women who know their way around a weapon. Villages have big dogs, big cats, ferrets and maybe talking squirrels and mice and a 70lb racoon or two. It's a fantasy world and the relationship between all the creatures who rely on the village can be strong and fantastic in its own right.

Communication is where it can all come together. Villages have a range of ways they might talk to each other, calling for help if they need it. Birds are a good tool for messaging, and what village doesn't have a church bell or horn for emergencies? Aid isn't always as far away as you think. As for flying creatures, there are a lot of eyes in the sky and many of them have a vested interest in the village.

Villages haven't survived the years blindly. They've brokered deals with bandits and monsters, some of whom benefit from the continued existence of the village and don't want to see it burned to the ground. There are strange creatures who, over the long years, may have developed relationships with the locals. Diplomacy and past favors help most villages survive.

It's helpful to remind yourself what a penniless farm village in the wilderness is like: there's nothing to steal except some chickens and pigs. Is it worth fighting a bunch of desperate pitchfork-wielding farmers for some geese? It's like a pack of cayotes: sure you could take them out, but is it worth the trouble?

Shepherds and the Unprotected Fold

I always love it in games when the intrepid adventurers are out in the countryside, attacked by bandits and orcs, but somehow there's a shepherd wandering around with a fat flock. Sheep are a big part of a fantasy world (what's a game without mutton!), but how on earth do they manage outside the safety of a village wall?

Fairies and a little magic: helpful faie or magical tokens that make them go unseen to threats, or rise up to scare off the wolves. In the real world (there's such a place) it turns out adding a llama to a herd of sheep freaks wolves out so much they leave them alone!

...if there are dire wolves are there Dire Border Collies?

The fierce shepherd dog: if there are dire wolves are there Dire Border Collies? Not sure what the opposite of 'dire' is, but surely the loyal shepherd animals are up to the task, maybe whole packs!

And of course there's some divine protection from gods and spirits, blessed items and holy spells (that little prayer before they head out surely does something). Is there a curse for people who kill a shepherd? Surely that's bad luck!

There can be practical solutions as well: deals and arrangements with bandits and even orc and goblin tribes -- leaving a sheep tied to a tree for the goblins is a small price to pay, and not snitching on Mean Bob and his bandit gang isn't too shabby either if it means the flock makes it home intact. And yes, I've had players find a tribute sheep and take it for themselves, finding a slaughtered village on the way back and wondering what happened.

Thieves and raiders have a certain pragmatism: if you kill off the whole flock (or burn down the village) then you won't have a sheep to steal next month. Losing a small number of animals this way (or from the odd wolf or griffon) is part of a larger regional ecology: "if you give an orc a herd, he'll eat (like a king) for a day; if you let him steal one now and then, he'll eat forever"

Lastly, there's hallowed ground: grazing spots are often sacred or magical places, from centuries of use or the direct result of a spell or friendly faie. These may just be seen as "good spots" in the eyes of the shepherd, but the reasons for it can be long (and fodder for a good adventure hook).

Hired Help: Adventurers for the Win

...a "random encounter" for PCs is one less threat for NPCs!

There's no counting on it, but when a band of seasoned adventurers (read: "heroes") comes through, they sometimes answer the call. Goblin caves get cleared out, wyverns get killed, bandits get the axe. Adventuring parties often take care of the problem by accident when they run into threats on their way through: a "random encounter" for PCs is one less threat for NPCs!

It's not just the dark woods that are dangerous: the sky is full of hungry flying things. In Telrhin it's usually griffons or wyverns flying off with your cattle, but most things are bigger in a fantasy world: hawks, eagles and bats are all a threat. The best defense is not to be noticed, a little magic to keep you unseen. Barring that you need your own flying friends: falcons or a murder of loyal crows, or just enough bark from the dogs to drive off a casual snacker.

Villages have porches and covered areas to hide under, and a lookout post -- sometimes just the church steeple -- to help warn everyone to take cover. In the Telrhin Lowlands there's a settlement design called a Dorum: a donut shaped building with a central courtyard and water well, the bottom level and the cellars used for grain and storage, with people living on the floors above. There's usually only one way in, and the roof is made of tiles and things that don't burn. It's like a tiny fortified town with the outside wall sturdy and short of windows.

There are a lot of flying things in a fantasy world: the "Mythic Beasts" site for instance lists 430 mythical flying creatures.

PostScript: Bring in the Army

We're talking about the common and persistent threats, but what happens when a dragon comes through or orcs invade? Tough luck for the locals, but these larger threats bring larger responses. Kings don't like it when they lose whole villages: it's bad for business! They muster armies, hire professionals or (depending on your story) hold competitions to select a hero. Hired swords, mages, priests, and knights are born for these jobs.

So don't think the peasants are helpless. They're vulnerable to be sure, but life balances itself and people find ways to carry on.

Instead of asking 'how are they not being eaten?', maybe ask yourself how monsters even stand a chance!

If you're still curious about how things work in the daily lives of commoners, check out the post on Magic and the Mundane in the Temple of Tala the Wise. It touches on the "common magics" of a fantasy world and what regular parishoners can expect from their priests and church.