Ravines and Other Killers 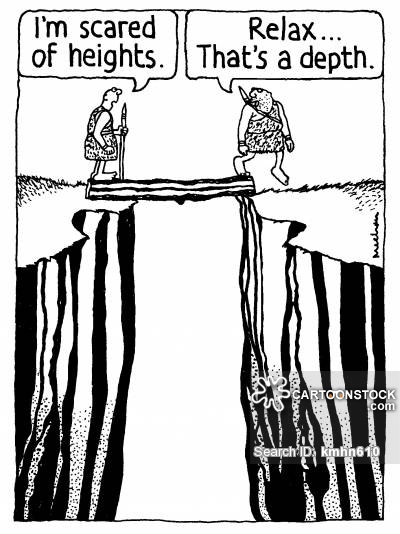 The fantasy genre gets a little dull in a winter wilderness. The party has been climbing down ravines. Climbing back up ravines. Crossing ravines. Drowning in the water at the bottom of ravines. This is the inglorious death of an adventurer.

I tried to spice things up, but most of the usual suspects are hibernating. And it's not just winter, but the wilderness: no farms or towns to explore, hordes of humanoids or country brigands. I did give them a dragon, but that devolved into a debate on whether or not they're warm-blooded.

At one point I resorted to kobolds with catapults.

Warring tribal factions was a thought, but who fights in the dead of winter? Whole Afghan wars shut down for winter. Some undead, some ghosts, sure. But how many can there be?

We've learned some things though:

This is what happens when you give players options. They think everything's an adventure hook. Describe a sickly dog in an alley? Evil cult is poisoning dogs as a precursor to world domination! Point out the thatched roof on the inn? Obvious arson foreshadow! So when my “flavor text” included a bunch of mercenary adventurers docking at the ferry to load up for an expedition to a remote mine in the hinterlands? "Let's join up!"...  so here we are. Wilderness. Ice. Snow. Ravines. My favourite part is that the further they go the less they want to head back: "it's so far, I don't want to trudge all the way back again." So... they go deeper.

This doesn't mean i haven't tried to make it interesting. There were brigands and orcs and fairies and gnolls and zombies and skeletons and then huge-giant-frankenstein-zombies. There were tentacled water monsters. There were rapids and overturned boats. There were crazed attack bears covered in spiked barbed armor. There was inter-party intrigue. There were planted spies from external factions. There was even a liche they narrowly avoided and only know about from reading the blog. There was an entire slave ship that “teleported in” to do business with said liche. There were carnivorous pandas.

None of that has saved them from the ravines.

Are there more creative encounters to salvage the dullness? More interesting monsters? Exposure to the ruins of a world rich with history? Sure, but here's to hoping for cities and a good pint.

(the cartoon is totally stolen from cartoonstock.com)

This seems like it would be an opportunity to explore cultures that live further up/inside the mountains. Perhaps species that migrate south in the deeper winter to the "cooler" winter mountains that your party is traveling through. This could apply to ice dragons, ice trolls, wampas, or even eskimo inspired tribes. There could be a lake or series of lakes in a valley that freeze over in the deepest part of the winter, driving hunters to the more seasonal paths. Obviously, the easiest way to break the tedium of the wilderness is to discover a cavern, abandoned city, or perhaps monastery. In fact, I like the idea of a monastery in the mountains, abandoned and corrupted by some evil. Perhaps hints along the trail slowly building up to the discovery of the monastery. An encounter with a mad monk in the middle of nowhere.

All excellent suggestions. Thanks! Loving the mad monk/monastery storyline. Frozen lakes make me wonder what great stuff might be under the ice, maybe they can spot the top of some lost world below (but then that gets back to the Things We Learned: water in a freezing wilderness is suprisingly cold). And there should be a nigh-infinite list of creatures to prefix with "ice" in a fantasy world: ice-dire-wolves, ice-llamas, ice-extra-angry-giants...   had to google wampa which made me realize ice-wampa is redundant.

i say give up, put the ice to good use in some cocktails and wait for spring. Oh and maybe stay clear of ravines.