God Meat and the Cult of Sylas 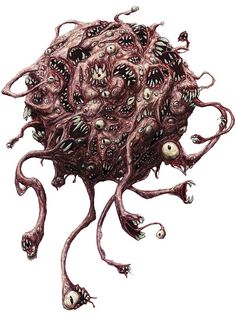 A Beholder, not the actual god-meat-thing

Like most religions the Cult of Sylas has a few variants and offshoots, loosely wrapped in the fold of the larger faith. One of those sects within the church is Sylas the Merciful, best known for their charity: namely the free meat they hand out to the poor among their flock.

a giant, pulsing organism that looks more like a bleeding meatball the size of a beholder. There's no head, only the hint of vestigial bones, and some tufts of hair that - hopefully - was once fur.

Meat in a world before cattle ranchers was a luxury, often served because the cow died. So a church that can dole out meat is either rich or, in this case, creative. At some point someone decided to shave off chunks of a goat (some people say it was a dog) and then heal it back with holy magic. Most people say this started during the Blood Plague with thousands starving by the day. Other people say it started long before that in the bowels of the temples of slightly darker gods (*cough* Ryrg-Velkrin *cough*).

Regardless, this original goat-dog-mystery-meat source was carved up and healed up so many times it evolved into something very different: a giant, pulsing organism that looks more like a bleeding meatball the size of a beholder. There's no head, only the hint of vestigial bones, and some tufts of hair that - hopefully - was once fur.

Some might argue that this is the greatest solution to starvation ever conceived and a true miracle of the gods. Others - possibly the zealous followers of other religions - called it a blasphemous abomination. When it came to light that the source of the free meat was a giant bleeding aberration, the meat lost its appeal and communities turned against it. It didn't help that it had a strange taste some people compared to fish oil. The fish taste was sometimes excused away with an elaborate tale of Sarides, the "sometimes-brother" god of Sylas, and how he plucked the meat-sack-thing from the sea.

A lot of people talk about a divine euphoria they experience with the meat. True or not, this only made everyone else more suspicious: it's rancid! A trick to make converts! It's made from people! It has the souls of orphans!

There are still some temples to Sylas that serve it, discreetly offering it as 'wafer meat' to the neediest, mixed with a little shame and desperation. People tend to call it 'god meat', a play on the original goat meat claims. Who knows where or what the original animal is, maybe it's still alive somewhere deep in the vaults of a temple in the Grasslands. But there are offshoots, clones of it, spread across a few dozen churches like the Sylasian temple in Gevenwall.

Some people place the origin of the whole meat thing with the forgotten grassland goat-god Puknet (see the post on Lost Gods). Which helps explains the "goat meat" name. But whether or not the idea was appropriated, the end result is the same: a nameless blob of breathing bleeding meat you really don't want to see with your own eyes.