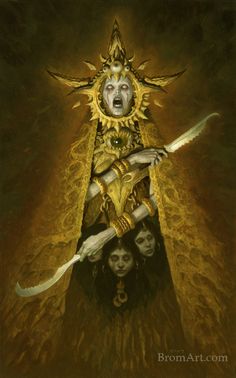 A snippet from some new work on the Field Guide. Combing through the religions I found a few tidbits that needed a little housekeeping, namely the "forgotten gods" of earlier people, mostly lost in the Diegesan Struggle as the Chimerum combined into one. I also found out I've been mispelling 'worshiped' for 30 years.

If there were such a thing as archaeologists they'd find remnants of forgotten gods as well as different interpretations of the current ones. There's Bachnel, the brother of Gahl who was god of night and dreams, and the Goat God of the Grasslands called Puknet. There are ancient Rayikian texts with references to Borgia goddess of seizures and possession. There are whole religions that are lost, like the Sanctum of the Four Winds. There are also gods clinging by a thread: you'd be hard pressed to find anyone who prays to Greslionor. Some ancient and mighty gods were absorbed into new religions in demoted roles like the once great sea god Sarides. Are they dead? In a timeless sleep somewhere on the edge of the Listar near the Sea of Dreams? Or did they just get tired of people and stopped paying attention to them. If the Listar really is tethered to Prime "by a tenuous sense of memory, faith and origin" then maybe it's enough for other gods to carry the weight. But maybe these lost gods are desicated husks, waiting to be rediscovered, ready to rise up in the wake of renewed belief.

True on the misspelling, but I did have to change it to 30 years after I realized Telrhin's been around since 1984.